WASHINGTON D.C. – Today, Campaign for Accountability (CfA) launched the Google Transparency Project (GTP), an online resource that allows the public to explore the company’s influence on government, public policies, and our lives.

The GTP is the latest project from CfA, a nonpartisan, nonprofit organization that works to expose undue corporate influence on government. Google is the most prominent, yet under-explored case of a deep-pocketed corporation that has forged successful and lucrative bonds with government officials and federal agencies.

CfA Executive Director Anne Weismann said: “Google has long been a strong advocate of transparency in government, business, and even users’ private lives. It has not, however, been transparent about its own dealings with the government. The GTP will shine a light on how Google influences our government officials, public policies and the way we live.”

The project will compile and organize data from public sources and make it available for review. The data can be explored using online tools or downloaded with the aim of encouraging a crowd-sourced investigation of the company’s influence in Washington and elsewhere.

CfA researchers have spent much of the past year collecting and interpreting thousands of pages of public records and online documents in the project’s initial phase. Two datasets are being released today: 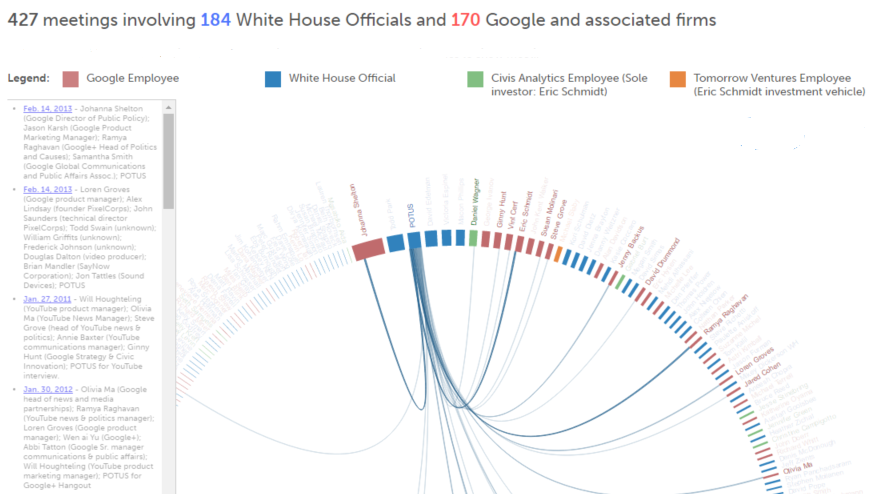 “Over the course of just 15 years, Google has grown into arguably the most powerful company on the globe by becoming its biggest data-mining operation” said Weismann. “Google knows more about us than we know about ourselves, but we know surprisingly little about Google and how it actually operates. The company’s business practices and political influence, as well as how it uses our private information, are disturbingly opaque.”

The GTP can be accessed at: http://googletransparencyproject.org.