In September 2008, Sen. Crapo’s campaign manager loaned $250,000 of the committee’s money to Blueberry Guru LLC, an investment company owned by a friend of the campaign manager.  The LLC then invested the money in Pyramid Global Resources, a Nevada real estate venture.  The manager believed the loan would generate an eight percent return for the committee.

The manager, however, did not disclose the loan’s existence to Sen. Crapo or the FEC, and the loan resulted in a total loss for the campaign. The manager only disclosed the loan to Sen. Crapo in December 2010, when he left for another job.

The Idaho Statesman later reported that Sen. Crapo then hired an attorney to investigate the matter, and he disclosed the loan to the FBI .  The Statesman reported the FBI investigated the loan and submitted a final  report to federal prosecutors, who, in November 2012, declined to bring charges.

In April  2013, an attorney for the campaign committee sent a letter to the FEC publicly disclosing the problematic loan for the first time. On September 25, 2014, the FEC announced it had closed its investigation into the matter.

CfA has been closely tracking Sen. Crapo’s ethical lapses.  In April and May, CfA filed FEC complaints against Sen. Crapo’s campaign committee for failing to disclose any payments to use a lobbyist’s Capitol Hill condo.  Sen. Crapo later admitted that his campaign committee used the condo, for free, on 81 occasions.  In June, CfA filed an ethics complaint against Sen. Crapo for failing to disclose payments from his PAC to his wife, Susan, on his personal financial disclosures.

Stevens continued, “Sen. Crapo has repeatedly ignored federal laws requiring him to disclose information about his PAC and personal finances.  It’s clear that Sen. Crapo cannot be trusted to tell the truth about his financial activities. The public deserves to know what the FBI found during its investigation of Sen. Crapo’s campaign committee.”

UPDATE: On June 1, 2020, CfA released FBI documents obtained through open records requests, which provide additional evidence that Sen. Crapo knew about and approved the loan. The documents reveal that the FBI interviewed an unnamed staffer, who explained that Sen. Crapo was aware of the loan and personally approved it before it was issued. 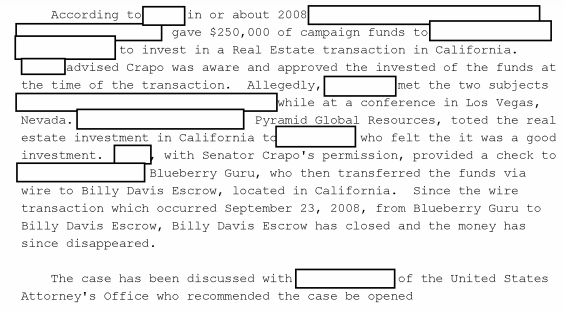